Thanks to all SWL's and to all that called in and provided signal reports to today's IRTS 4m News. 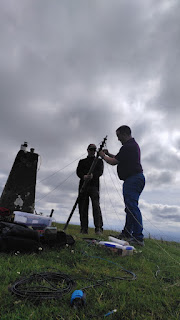 Todays news was broadcast from:
Dunmurry Hill, Kildare
Locator: IO63ME87
ASL: 234m
Frequency: 70.400 Mhz
Mode: FM
Radio: Anytone AT-588
Power: 40 Watts
Antenna: 5/8 Wave Hawkins Viper Portable 4m Antenna
Antenna mounted 10m above ground on a portable telescopic mast.
Thanks to Paraic, EI9IRB, for droping by to say hello and for helping with setting up and taking down the portable station. It was great to meet you and we look forward to seeing you again.
Thanks Artur, EI9IKB, who is newly licensed and built his own 4m antenna for calling in with a report. We enjoy hearing new callsigns on 4m.
Today we received from call in's from:
EI4DP Ian operating static mobile from the Wicklow Gap
EI5IAB Dom operating portable from Slievecorragh SOTA Summit Reference  EI/IE-039
EI6IRB Michael operating Portable from Saggart Hill SOTA Summit Reference EI/IE-044
EI2GLB Trevor in Kildare
EI3DWB Finbar in Kildare
EI4GGB Owen in Mullingar
EI7HT Tom in Tallaght, Dublin
EI8JB Charlie in Slane, Co. Meath
EI7GUB Tony in South Dublin
EI9IKB Artur in Swords Co. Dublin
EI8IPB Johnnie in Rush Co. Dublin
There was one other station attempting to call in, however, it was way down in the noise we could not make out anything.
We did try a few times to copy you and asked if other stations could relay your message. It appears that these stations could not hear you either.
If you are reading this you might reply with a signal report, your location, radio, and antenna setup.
We will now begin looking for a location to operate portable from for September's news broadcast.
If you have any suggestions for a suitable location, ideally on high ground in the Leinster region please get in touch.
Thanks again
73East Leinster Amateur Radio Club - EI0EL
4M 4Meter IRTS News Operating Portable
Location: Dunmurry Hill, Co. Kildare, Ireland