The battery arrived among the ancillaries with a recently purchased PRC319. It was manufactured in July 1989. Unlikely to charge, let alone hold a charge, the battery was test-charged under constant observation using a standard Clansman 28v battery charger (NSN 6130-99-117-0450). 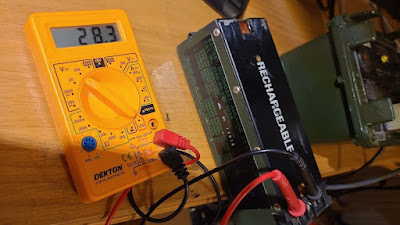 The battery case soon became hand-hot and after ten to fifteen minutes it began leaking battery content which appeared to ‘boil’ and bubble out of the top of the unit.

Unsurprisingly, the battery did not hold a charge. 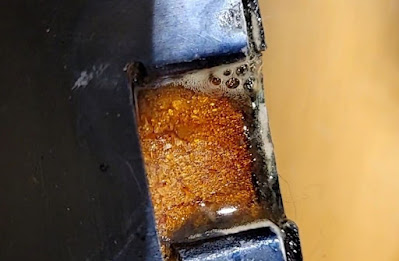 As anticipated, it was unserviceable.

As the case was in a very good cosmetic condition, there was every chance that the battery could be refitted with a similar voltage and ampere battery and made serviceable again.

The first task was to open the unit and remove the leaking alkaline cells and their foam packing. 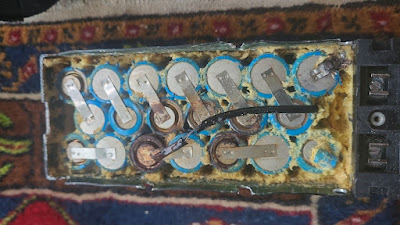 The battery pack in Clansman batteries is encased in a hardened foam which needs to be chipped away to loosen the pack allowing it to be removed cell by cell. This is time consuming, especially on the larger 3.3Ah Clansman battery.

Some portions of the packing foam came away easily and the remaining mass was simply drilled in situ to turn it into powder and the resulting mess hoovered away.

This revealed the cells and with a bit of manual effort they came out easily.

Then the remaining matter was effortlessly, if rather brutally, cleared using an end brush on a drill . This procedure was carried out wearing eye protection and a mask: there was a lot of loose ‘stuff’ flying about. 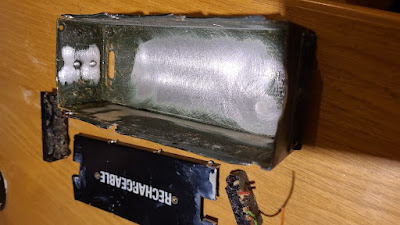 The original battery contacts were cleaned and were suitable for re-use. The heat-sensing diodes in the battery, which are part of the Clansman charging sensor system, were already damaged and were discarded.

With a cleaned-out shell, clean lid and clean contacts to hand, the question was what to replace the alkaline cells with.  Some advice from a radio guru friend and a search on E-Bay led to a 24v 2Ah lithium e-bike battery (with charger).

This new battery was the right dimensions to fit into the case. After soldering its leads to the original battery contacts, checking the voltage, and strapping up the case with cable ties the rebuilt unit was tested on PRC-351 and all was correct on transmit and receive. 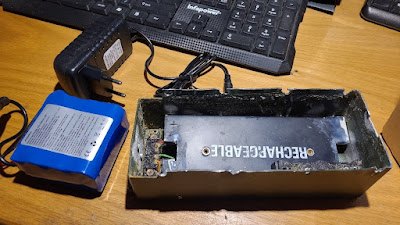 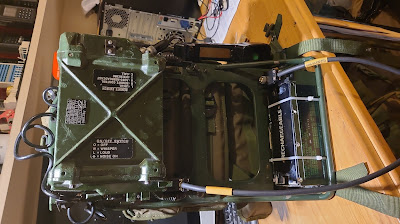 Recharging is done by slipping the cable ties and lifting the lid of the battery case to connect the charging cable. It would be possible to mount a DC socket in the unit and connect the battery to it, but this is a ‘least-effort, rough and ready’ rebuild.

The battery read 21.3 volts on arrival and at that level gave close to four hours service between tests on a PRC-351 and a PRC-320.  At 16.8 volts on receive on a PRC-320 the battery announced its need for a recharge by simply and suddenly cutting the set out. 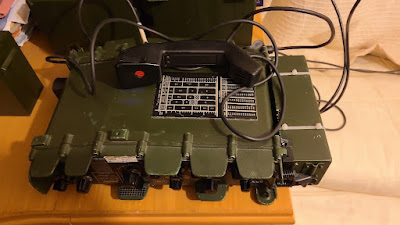 The rebuild was hardly to original standards and was in no way intended to reproduce a replica battery. It recycled an otherwise unserviceable unit to working condition through an enjoyable experiment in controlled destruction and reconstruction and the most primitive rebuilding techniques.

Today club members Tom EI5IEB and Frank EI8HIB concocted a successful test of being able to send and receive email over HF. Tom and Frank setup two portable field stations in the hills outside of Skerries, IO63vn  on Sunday morning. A schedule had been setup in advance with David EI3HIB  to test both the sending and receiving of email using Winlink over HF on 80m. This test formed part of a wider AREN (Amateur Radio Emergency Network) initiative to understand the practicalities of country wide email communication over HF in the event of a grid down and as a mechanism for radio armatures to aid the emergency services in passing messages. 80m was chosen as it lends itself to NVIS (Near Vertical Incidence Skywave) communication. The club noticed that every Sunday at 1200 local time the IRTS news is broadcast on 3.650Mhz from locations around the country. Call in's afterwards are received from both fixed and portable station country wide. From one of the club's primary portable s
Read more