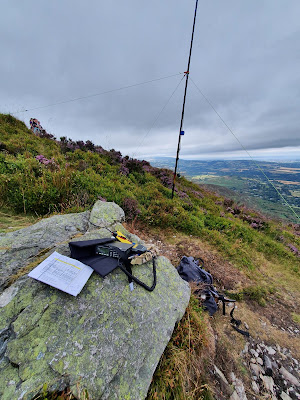 Club members made their way to their allocated summits on Saturday morning. This is the first time some of these summits have been activated on 4m.

Ad-hoc check-ins were maintained between members on route via EI2KPR.

WX was not great. Rain, low cloud cover with visibility of 20 to 30 meters on the summit.

After setting up the station a radio check was carried out. Frank, Dom and Michael all came back reporting 59.

We had 15 minutes to spare before the start of the net so used this time to fire up the stove and make a coffee. This nicely complemented the breakfast rolls picked up on route.

The net started at 1200 Local Time and continued until 1300 local time.

A total of 8 stations called in to the net.

The format of the net was as follows:

Net Control announced the start of the net and invited stations to check-in. Call signs were collected and Net Control read back a listing of all callsigns heard and invited callsigns not heard to call-in.

Net Control started as the top of the list and called each station in turn. These stations then exchanged name, location, signal reports and a brief QSO with net control. Once the one through of the list was complete a net control invited any other stations who wish to join to call in. 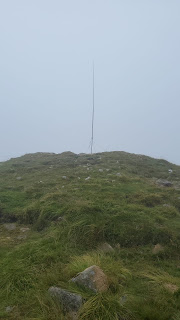 Unfortunately Net Control was unable to copy Dave in Dundrum, however other stations in the net were and his messages were relayed to net control.

Starting at the top the list each station was then invited to attempt a QSO with other stations on the net reporting back to Net Control once QSO's were complete.

This was a great opportunity for people to see how their equipment was preforming as well as add some more 4m contacts to their logs.

During these QSO's a combination of power and those with beams made adjustments in order to get a better outgoing and incoming signal. 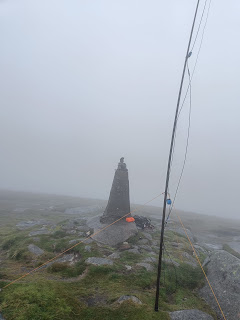 The East Leinster Amateur Radio Club would like to thank all those that called in and those that supported them in this endeavor. This would not have been possible without you. A big thanks to all of you.

We will soon begin planning the next 4m net.