Today club members Tom EI5IEB and Frank EI8HIB concocted a successful test of being able to send and receive email over HF.

Tom and Frank setup two portable field stations in the hills outside of Skerries, IO63vn on Sunday morning. A schedule had been setup in advance with David EI3HIB to test both the sending and receiving of email using Winlink over HF on 80m. This test formed part of a wider AREN (Amateur Radio Emergency Network) initiative to understand the practicalities of country wide email communication over HF in the event of a grid down and as a mechanism for radio armatures to aid the emergency services in passing messages.

80m was chosen as it lends itself to NVIS (Near Vertical Incidence Skywave) communication. The club noticed that every Sunday at 1200 local time the IRTS news is broadcast on 3.650Mhz from locations around the country. Call in's afterwards are received from both fixed and portable station country wide. From one of the club's primary portable setup locations the stations calling in are generally heard quite clearly, typically 47 to 59+. On some occasions QRM and QSB can be a factor impacting readability of the signal. If voice traffic on 80m can be sent and received there should be no reason that data could not do the same. 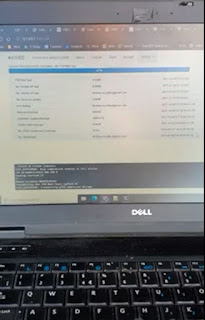 Our field station consisted of a homebrew 80m dipole with the centre about 2m off the ground and the ends of each leg also about 2m off the ground suspended by paracord from trees. The radio was a Yaesu FT-857D running at 50W connected to a Raspberry Pi via a xggcomms digimode 4 cable. Software used was ARDOP with Pat a Winlink Client for Linux.
David's station was located at a fixed location. He was running a Icom IC-7300 at 50W in to a shortened EFHW using a coil to tune to 80m. He was also using Pat and ARDOP..
Both stations were successful in sending and receiving Winlink emails via P2P.
The next stages in testing will be to engage with more AREN members to further test capabilities between more stations, both in the field and from fixed locations. Members of AREN are already working on building a standalone Winlnk mail server for testing.

Copy of messaged received from Dave. 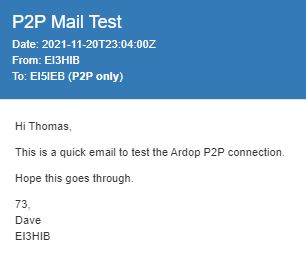 By Tom EI5IEB One of the founding principles of the club is to have fun, build project and to prepare members for the HAREC exam. Over time we have developed training programs covering the theory with practical demonstrations for members and created a number of quiz's as training aids to highlight areas requiring more study. In the past few months a club,  the  National Shortwave Listeners Club , (SWL Club) has been setup with the purpose of helping members take and pass the HAREC exam. Meetings are held regularly over Zoom. This is a great step forward in encouraging new people in to the hobby. All courses are led by volunteers who are experienced radio operators, have specialist knowledge and others who are experienced trainers. Having all the knowledge in one place is a great combination. Two of our club members are also members of the SWL Club and are studying to pass the HAREC exam. Last night, Tuesday 28 April 2021, I was invited to attend a Zoom meeting of the National Short
Read more