On Sunday, 4 July 2021, we maintained the traveling nature of the IRTS News 4 Meters News  Station by transmitting from Clermont Carn, Grid IO64UB19. 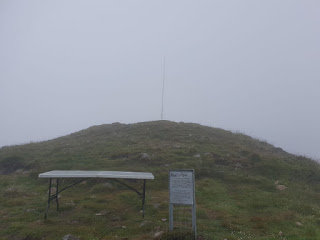 The weather was not great with thick fog and rain, however the great take off in all directions more than made up for this.

While setting up Declan, EI6FR, stopped by to say hello before he setup to activate Clermont Carn EI/IE021.

Declan setup his station a short distance from the 4m antenna so as to limit any CW interference. Thanks for that Declan, we apricated it.

We put out a few calls before the news to make sure everything was working as expected and we were not getting desensed from the towers behind us. 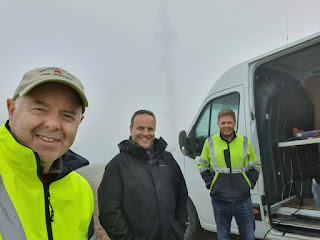 Harper, MI5AFK, came back and a we had a brief QSO. He kindly offered to reach out to other local amateurs in the area who also operate on 4m that we would be broadcasting the IRTS news at 1030. Thanks for that Harper and we hope to talk to you again.

We had a total of 12 call in's and 1 report via email were received form stations covering an area from Antrim to West Meath to Wicklow. We received 5/9 reports from 11 stations, 5/7 from one station and a 4/3 report from another station. 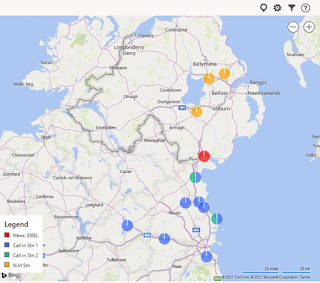 It was great to hear from the regular stations and also from some new stations including a number of Northern Ireland stations calling in. We were excited to hear that a number are expressing an interest in making contact again next month even if they have to go mobile to hear us.

The East Leinster Amateur Radio Club would like to thank all radio amateur’s and shortwave listeners that called in to the 4m news and supplied signal reports, and also to those Amateurs who gave feedback and encouragement.