The East Leinster Amateur Radio Club (ELARC) conducted a Pilot IRTS News Broadcast on the 4 metre band, on the first Sunday of April, May and June.

The News Broadcasts took place from Field stations in the East Leinster region with a portable station on 70.350 MHz using FM.

ELARC had several objectives, firstly to generate greater interest in the 4 metre band, secondly to operate Field Day style with portable power and finally to have a bit of fun while operating as a team under some pressure. ELARC believe they achieved all objectives with a good number of Call-ins and a lot of experience gained. 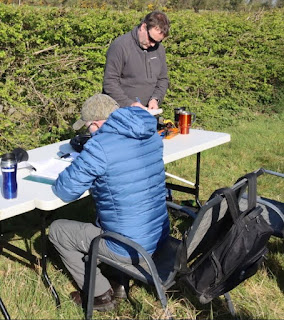 We set-up the station on a hill approximately 2km south of Skerries. The antenna was a Viper 7/8th wave 4m antenna strung up into a tree, with the top of the antenna approximately 12m above ground. The location was about 100 metres above sea level with a good take-off to the south and west.

The radio was an Anytone AT-588 running 40 Watts powered from a homebrew 15Ah LiFePo battery pack.

We invited call-ins and received reports from 11 stations. The furthest stations were from Mullingar, Kells and Greystones.

Some stations reported that they were also operating portable, giving them a better Line of Sight from their elevated positions and a better chance of a good signal report. There were several stations that reported that this was their first contact on 4m, which was fantastic. The vast majority of stations were using ex-PMR radios re-programmed for use on the amateur 4m band. 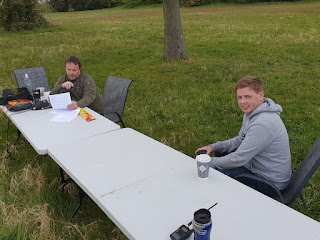 An SWL had suggested that this type of antenna should provide better performance over the Viper vertical used on the first broadcast. This was great feedback and exactly the kind of interest we had hoped to generate. It was also fun project for the club to build and test prior the news read. The radio was once again the Anytone AT-588 running 40Watts powered from a homebrew 15Ah battery pack.

We received some feedback after the broadcast suggesting we could transmit from an alternative location. Possibly from an elevated site closer to the Midlands. This would of course be pending government guidelines in force at the time. 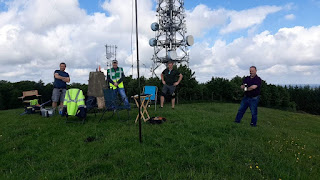 For the third broadcast we took on board the feedback and moved to a new elevated site, Dunmurry Hill, approximately 4km from Kildare Village. This gave us a great Line-of -sight on all four points of the compass.

This time the antenna was a home-brew ¼ Wave vertical ground plane antenna, suspended from a 6m telescopic mast. The radio was once again the Anytone AT-588 running 40Watts powered from the homebrew 15Ah LiFePo battery pack.

The weather conditions for this third broadcast were excellent, with blue skies and light winds from the south-west. We had a crew of five ELARC members from county’s Dublin and Kildare who all contributed to the event making it a great day.

We received 6 call-ins from Bray Head to Kells, all enthusiastic 4m operators.

We have determined that there is sufficient interest in the 4m Band to continue the Pilot. We will maintain the travelling nature of the 4m News Station, probably broadcasting from more elevated sites, maybe even the odd mountain top. We need to finalise an operating frequency and we will most likely maintain the pattern of the first Sunday in the month.

The East Leinster Amateur Radio Club would like to thank all radio amateur’s that called in to the 4m news and supplying signal report, also those Amateurs who gave feedback and encouragement. Finally, a great thank you to our families for putting up with us disappearing on Sunday mornings

An edited version of this report was formally submitted to the IRTS Committee.
4Meter IRTS News Operating Portable

Today club members Tom EI5IEB and Frank EI8HIB concocted a successful test of being able to send and receive email over HF. Tom and Frank setup two portable field stations in the hills outside of Skerries, IO63vn  on Sunday morning. A schedule had been setup in advance with David EI3HIB  to test both the sending and receiving of email using Winlink over HF on 80m. This test formed part of a wider AREN (Amateur Radio Emergency Network) initiative to understand the practicalities of country wide email communication over HF in the event of a grid down and as a mechanism for radio armatures to aid the emergency services in passing messages. 80m was chosen as it lends itself to NVIS (Near Vertical Incidence Skywave) communication. The club noticed that every Sunday at 1200 local time the IRTS news is broadcast on 3.650Mhz from locations around the country. Call in's afterwards are received from both fixed and portable station country wide. From one of the club's primary portable s
Read more