We tried something different this weekend and took advantage of traveling to another county. This was something we as a club wanted to try for a while.

Could we communicate effectively between Skerries and Rathangan, Co Kildare on 80m utilising NVIS?

Tom travelled Rathangan, Co Kildare and met up with John EI1762. They setup a portable station using a FT857D a custom built 15Ah LifePO4 battery pack, and 80m homebrew linked dipole at the local Men Shed in time to call in to the 80m IRTS News.

Meanwhile Frank was operating portable from Badlungon and both Ben and Dom where operating from their home locations in Skerries. 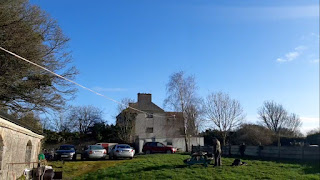 After the news all stations moved to a free frequency and got a net going. Signal reports of 59 were exchanged between Tom and John in Rathangan with Frank in Badlungon. Ben, operating from home also gave a 59 report to the guys in Rathangan. Dom was monitoring 80m via a SDR station in the UK and relayed a 59 report to the group from the SDR station via WhatsApp. Tom and John also returned a 59 signal report to all other stations in the new.

After a brief net Tom and John dropped the power down to 5 Wats and signal report where exchanged between them and Frank. A report of 56 /57 was received for both parties.

This turned out to be a very successful test show how effective NVIS on 80m can be at low power for inter-county communications.

By Tom EI5IEB One of the founding principles of the club is to have fun, build project and to prepare members for the HAREC exam. Over time we have developed training programs covering the theory with practical demonstrations for members and created a number of quiz's as training aids to highlight areas requiring more study. In the past few months a club,  the  National Shortwave Listeners Club , (SWL Club) has been setup with the purpose of helping members take and pass the HAREC exam. Meetings are held regularly over Zoom. This is a great step forward in encouraging new people in to the hobby. All courses are led by volunteers who are experienced radio operators, have specialist knowledge and others who are experienced trainers. Having all the knowledge in one place is a great combination. Two of our club members are also members of the SWL Club and are studying to pass the HAREC exam. Last night, Tuesday 28 April 2021, I was invited to attend a Zoom meeting of the National Short
Read more