Shortly after 1200 on Saturday members of the club met to get their antenna's setup for the 8 hours Portable Operations Challenge contest run by the team over at Fox Mike Hotel. 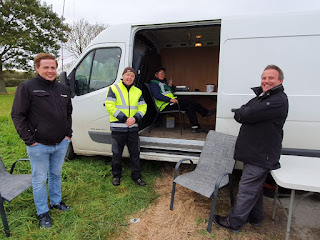 The team setup a home brew linked dipole (20m and 40m) using 3x 6 meter telescopic masts for TX. One supporting the dipole centre and the other two supporting the ends of the legs. This allowed us to get the legs as horizontal to the ground as possible.

Taking turns operating, logging and coffee making was key to keeping us semi-sane for the duration.

Luckily the rain held off but there was a chill in the wind. We started off operating from a table in the open but soon took refuge in the comfort of the back of a van. 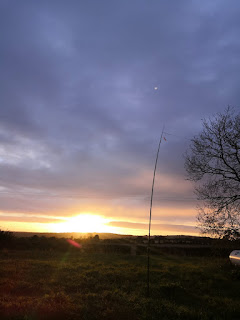 This acted as a rather large wind breaker. We had two people inside the van at a time , one as logger and the other as operator. This enabled us to follow the current DoH guidelines regarding social distancing. The radio was powered off a combination of a lead acid battery and home brew lifepo4 battery packs. A trusty old Trangia stove came to the rescue in providing hot water for coffee and cooking up the just add water and bring to the boil meals.

We changed the orientation of the dipole about 45 degrees during the contest however this seems to have made little difference as the majority of contacts were in a South East direction.

Our longest distance contact was with VE2CSI in Quebec Canada. It was great to make that distance from a portable station in a field on Irelands East Coast.

Of course no mug of coffee would be complete without some form of chocolate biscuit of which there was an ample supply of.

As the sun went down the temperature got a bit colder and the woolly hats made an appearance. The logs have now being transcribed from paper, entered in to  logging software, exported to Cabrillo 3.0 format and submitted to the team at Fox Mike Hotel for validation and scoring.