Today Frank EI8HIB, Dom EI5IAB and Tom EI5IEB headed up to the Cooley Mountains to take part in the IRTS 70 cm 2 meter contests.
The three operated independently with their own HT's , masts and antenna.
The weather and the views were amazing.
The wind was a pretty strong at times resulting in the collapse of a portable mast. Luckily there was no damage to the mast, equipment or the team. 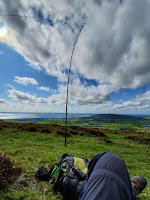