- August 31, 2020
Tom has built a 20 meter dipole for portable use.The build is based on a common speaker wire dipole build. Using the HF Linked Dipole Antenna Designer from sotamaps.org as a guide Tom set about building his.

The parts list is very basic.
The intention is to deploy the dipole from a portable 6 meter telescopic mast with the legs supported by 2 to 3 meter long tent poles with 2 to 3 meters of rope extenders. Putting these numbers in to the designer application we get the following results.

Using the commonly held belief that its easier to shorten the length rather then extend it after cutting, the speaker wire as cut to 5.05 meters.

Next step was to test the SWR of dipole. Running a sweep over the 20m band gave the following results. 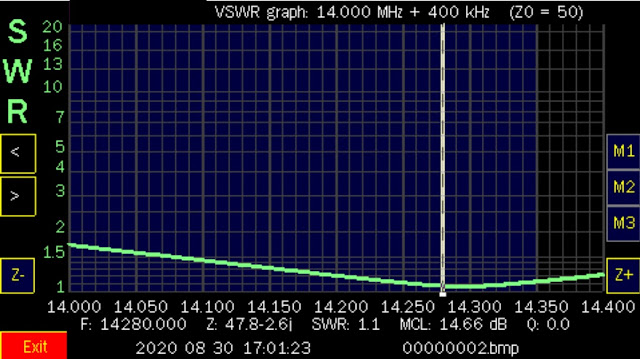 We were very happy with that as a first attempt.

Next steps will be to use this as a starting point for a linked dipole covering the 20 , 40 and 80 meter bands.